CTS Picks Axcient Over Datto for Cost, Capabilities, and Support 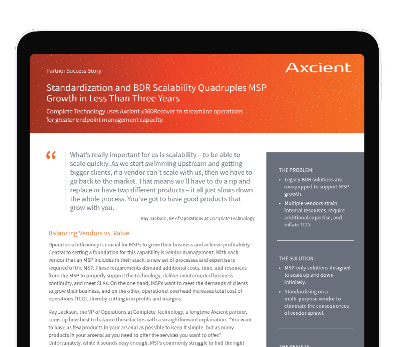 Axcient’s solutions meet a range of client needs with just one vendor for tech stack simplicity.

“Axcient gave us unbeatable prices and capabilities that really impressed us. Support has always been there for us – no matter the time or the effort. Our technicians swear by Axcient, and I really can’t say enough positive things about the partnership.” – Benjamin Jones, Director of Cyber Security at Central Technology Solutions

“We used to use Datto. With them, you pay a low monthly subscription fee for the hardware, but there aren’t any upfront costs. Then Axcient came out with x360Recover Direct-to-Cloud [hardware free BDR deployment] and beat Datto’s price. Even without having anything on site, Direct-to-Cloud does a lot more backup and a lot better than Datto.”

“We used to use Datto. With them, you pay a low monthly subscription fee for the hardware, but there aren’t any upfront costs. Then Axcient came out with x360Recover Direct-to-Cloud [hardware free BDR deployment] and beat Datto’s price. Even without having anything on site, Direct-to-Cloud does a lot more backup and a lot better than Datto.”

CTS made the business decision to move everything off of Datto and into one solution with Axcient. They started using x360Recover with both deployment options – cloud-based and appliance-based – and then added x360Cloud for Microsoft 365 and Google Workspace backup. Benjamin says, “We were using Datto for SaaS backup, but again, Axcient does it for a lower cost, plus you get unlimited storage and retention and the archive feature. Datto makes you juggle licenses and pay the license fee even after people leave the business. Whereas Axcient lets you archive users and avoid the license issues, which is pretty awesome.”

Switching vendors can feel overwhelming, but the challenges of “rip and replace” are a thing of the past. Hardware-free D2C and Axcient’s proprietary Chain-Free backup technology eliminates expensive appliances, on-site visits, data reseeding, and risky cutover windows. Instead, MSPs can silently deploy the Axcient agent through their RMM tools, configure the backup schedule, and let it rip. Benjamin describes the migration as “A really easy move. No complaints. I don’t even remember putting much effort into it.” Once D2C is up and running, automatic, reboot-free upgrades are deployed regularly as new features become available from Axcient. Additionally, CTS moved almost 700 Microsoft 365 emails from Datto to x360Cloud. Benjamin and his team were impressed by the Axcient onboarding team and their dedication to the new partnership and usability.

“They showed us all sorts of crazy stuff that it could do, which was really cool,” Benjamin said.

Of course, like any BCDR solution, the true test comes when disaster strikes. CTS had the opportunity to see x360Recover in action when a client’s old server finally died. Benjamin explains, “x360Recover was pretty much wholly responsible for running one of the client’s most important pieces of software while we built the new server. It worked great, and it performed perfectly. We were able to migrate from x360Recover to their new server relatively easily.” The client’s business is a large golf course that includes a restaurant, so with their server down, the entire system relied on x360Recover. Axcient’s support team stepped in as needed, and as Benjamin says, “They didn’t stop – and it was well after 5 o’clock.”

With an MSP-only vendor like Axcient, support is more channel-focused, and I definitely appreciate that. You get a higher level of support which is nice. Axcient pretty much does all the work, and they don’t ask me to do anything. Once it’s fixed, they tell me to check it, and it’s always been great.” – Benjamin Jones, Director of Cyber Security at Central Technology Solutions

Since moving to Axcient, CTS has added x360Cloud to their standard package for all clients. This ensures that CTS clients will always be able to recover their Microsoft 365 and Google Workspace data no matter how it’s lost – be it accidental human error or a malicious cyberattack. It also eliminates the risk of complete downtime during a Microsoft or Google outage. Benjamin explains, “For what we pay, it’s worth it. We don’t want clients calling us after an incident and we’re not able to restore their data. Microsoft doesn’t do it, so we have to.” He goes on to say, “If we see a need for something, we tend to fill it and then work with clients later on pricing. We’re security-focused, giving our clients a better experience overall.”

On a case-by-case basis, CTS is utilizing the x360Recover D2C deployment option with more clients. Benjamin is happy to have a more affordable BCDR option that removes hardware costs without reducing cybersecurity. He says, “Obviously, it’s great to have something on-site for easy restores, but not everyone wants to do that.” Now, with x360Recover and its D2C deployment, CTS can satisfy multiple use cases with just one solution and one vendor – endpoint backup, no-hardware BDR, full service, BDR, and private or public cloud with x360Recover D2C for Microsoft Azure.

With x360Recover D2C, we have an option for budget-conscious clients who don’t want to pay the equipment cost. To be able to provide them with hardware-free BCDR is extremely valuable – especially with ransomware the way it is. It’s super affordable, so there’s really no excuse not to get that layer of protection.” – Benjamin Jones, Director of Cyber Security at Central Technology Solutions

Where They Are Now: